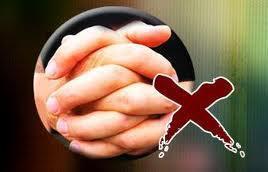 442 – It is reported that the Messenger of Allah (peace and blessings of Allaah be upon him) said:

“If any of you performs ablution, and performs his ablution perfectly, and then goes out intending for the mosque, he should not cross the fingers of his hand because he is already in prayer. “

Note: It is narrated from the words of Abu Sa’id al-Mak’bari that Abu Sumama told that (once) Ka’b ibn ‘Ujra overtook him when he wanted to go to the mosque and they met each other. (Abu Sumama) said: “And when he saw that I was intertwining my fingers, he forbade me to do this and said:” Indeed, the Messenger of Allah (peace and blessings of Allaah be upon him) said … “
The prohibition of interlacing the fingers in the hadith concerns precisely the case when a person goes to prayer or is in anticipation of prayer, or in the prayer itself. And it cannot be understood as for complete prohibition of interlacing the fingers, since the hadith itself specifically refers to the period when fingers should not be intertwined. Also, if we take the general understanding of this hadith, then it will contradict the reliable well-known hadith about Dhul-Yadayn (two handed). This is a hadith wherein the Prophet (peace and blessings of Allaah be upon him) performed two rak’ahs instead of four rak’ahs, where he was reminded of by a man nicknamed “Two-handed”,becasue his arms were very long. The hadith is well-known and is quoted by al-Bukhari 482. This hadith says that after praying, the Prophet (peace and blessings of Allaah be upon him)  intertwined his fingers. Also another famous hadith,“”A believer to another believer is like a building whose different parts enforce each other.” The Prophet (ﷺ) then clasped his hands with the fingers interlaced (while saying that)” –Bukhari 2446
Also, if we take a complete ban on intertwining fingers, then what about washing between the fingers during ablution, which, according to many scholars, is mandatory ?!
Thus, the correct understanding of the hadith is that fingers should not be intertwined when a person goes to prayer, expects prayer or in the prayer itself. And this prohibition is not limited only to the mosque, since if a person is in the market or at his home or elsewhere and prays, then this prohibition applies here as well. See Faidul-Qadir 1/483. This issue was also explained in detail by Khattab al-Subki in “Sharh Sunan Abi Dawood” 5/33.

One thought on “Saheeh Al-Jami ‘As-Saghir Hadith No. 442”