What can an average Muslim do for Al- Aqsa’? 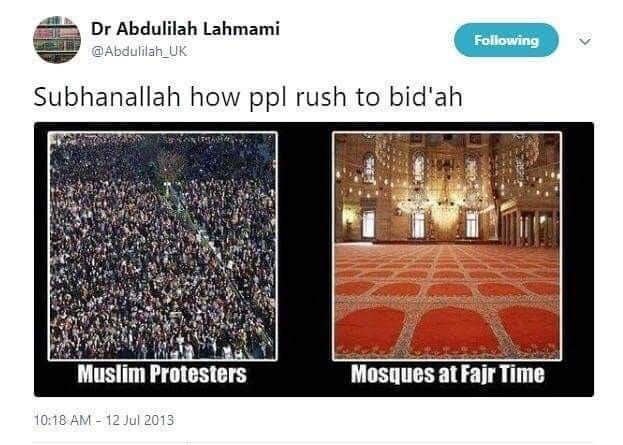 Noble Shaikh, there have come many questions asking about the position a Muslim should take with regard to what is going on with our brothers in Palestine, with respect to supplicating (for them), giving them money or making Jihad with them.

Then the Shaykh was asked, “May Allaah be benevolent to you. And this questioner says, “What is the ruling pertaining to demonstrations, and are they considered to be from jihaad in the path of Allaah?“

So he replied: “There is no benefit in demonstrations. Rather they are confusion. They are from confusion, disorder. And what harm will be done to the enemy if the people demonstrate a street amongst the streets and raise their tongues?! Rather, this is from the matters on account of which the enemy actually rejoices, and so he says that he has harmed them and cause damage to them, so the enemy rejoices with this.

Islaam is a religion of sanctity, and religion of tranquility, a religion based upon knowledge, it is not a religion of confusion and noise. It is a religion that aims to bring about tranquility and sanctity, alongside the working of beneficial and praisworthy deeds, such as aiding the Muslims and supplicating for them, and providing them with wealth. This is praiseworthy, and also arguing for their case with the nations, so that the oppression can be raised from them. And that the nations are asked, those who claim democracy for themselves, they should be asked to give those Muslims their right, and the right of a human is what they themselves boast about! However, in their view the human is the one who is a disbeliever, and as for the Muslim in their view, he is not a human but a terrorist. They call the Muslims “terrorists”. And the disbeliever is the one who has protection of rights, in their view!

So it us upon the Muslims to traverse upon the manhaj of Islaam in the likes of these affairs and other than them. Islaam did not come with demonstrations and clangor, and raising of the voices, or destruction of the state properties, or transgression. All of this is not from Islaam, it does not benefit, rather this harms the Muslims and does not harm the enemy. This harms the Muslims and does not harm their enemies. Rather their enemies rejoice with this, and he says, “I have affected them, I have made them angry, and I have affected them.”

The likeness of their rejoice is in the statement of The Prophet, peace and blessings be upon him, said, “Do not say: May Satan perish! If you say that, he will swell with pride until he becomes as big as a house and he says: By my might! Rather, you should say: In the name of Allah. If you say that, he will shrink until he becomes as small as a fly.”

And the satan are indeed from the Jinns and Mankind. And the kuffar who make us angry and agitated are one of them. Verily, the Quran says:

“from among jinn and humankind.” Surah Nas: Ayat 6

Watch Sheikh Salih al-Luhaydan speaking on Masjid Al-Aqsa’ and Our Attrocities which is leading to our humiliation.

The Prophet, peace and blessings be upon him, said: “There are not a people among whom acts of disobedience take place and they are able to change them but they do not change them except that Allah will soon include them all in a punishment from Himself.” (Abu Dāwūd 4338, Sahīh by Al-Albānī)]

Ibn Rajab commented on the many hadith of this nature, writing:
All of these traditions indicate that it is an obligation to condemn evil by the measure of one’s ability. As for condemnation in the heart, it is always required. Whoever does not condemn evil in his heart, it is a sign that faith has vanished from his heart… As for con-demnation of the tongue and hand, it is only obligatory within one’s capacity.
See Jāmi’ al-‘Ulūm wal-Ḥikam (2/245)

Hudhaifa ibn Al-Yaman reported: The Prophet, peace and blessings be upon him, said:

By the one in whose hand is my soul, you will enjoin good and forbid evil or else Allah will soon send the punishment upon you. Then you will supplicate to Allah and he will not accept it from you.