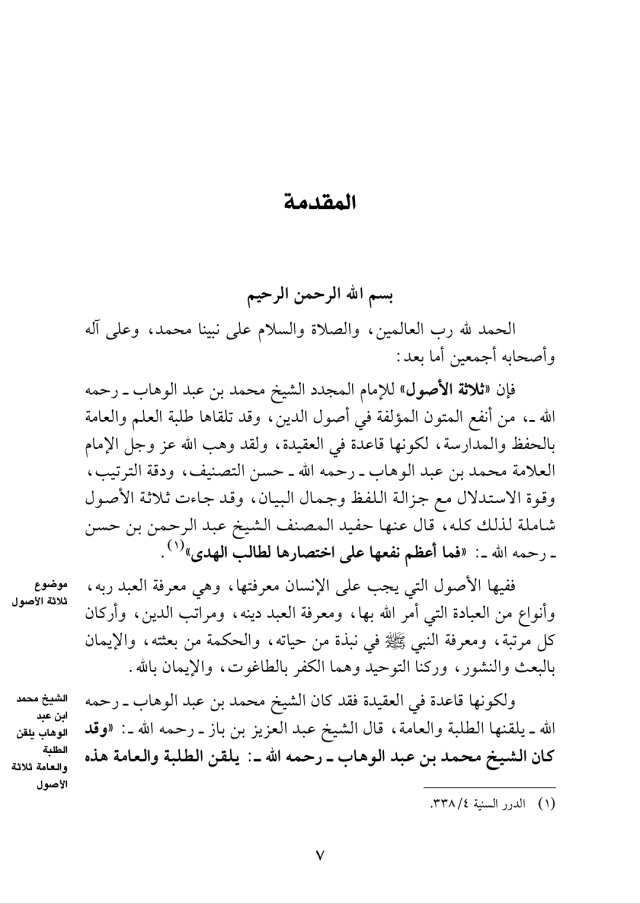 In the Name of Allāh – the Most Merciful, the Bestower of Mercy.

All praise is for Allāh – Lord of all worlds and may the peace and blessings be upon our Prophet Muhammad صلى الله عليه وسلم, and upon all his family and companions.

As for what proceeds:

Verily, ‘The Three Fundamental Principles’ (written) by the Imam, the Reviver, the Sheikh Muhammad ibn Abdil-Wahab رحمه الله is from the most beneficial written texts in the foundations of the religion, for verily students and the general([masses) have memorised and studied the text due to it being a foundation in Aqīdah, and verily *Allah سبحانه وتعالى has given Sheikh Muhammad ibn Abdil-Wahab (the ability of) beautiful authorship, a position in a hierarchy, accuracy, strong ability to derive rulings with eloquent speech.* Verily the three fundamental principles has come comprehensive of this. *The grandson of the author Sheikh Abdur-Rahmaan ibn Hasan said regarding the book: ‘And how great is the benefit from it whilst being summarised for the seeker of guidance’* (الدرر السنية ٤/٣٣٨)

In it (the three fundamental principles) are principles which are obligatory upon man to know, which is a slave knowing his Lord, and the types of worship that Allah has ordered (us) with, and a slave knowing his religion, and the levels of the religion, and the pillars of each level, and to know the prophet صلى الله عليه وسلم and his life in brief, and the wisdom behind his Prophethood, and the belief in resurrection, and the two pillars of Tawheed which are disbelieving in Tāghūt and believing in Allāh.

And due to it (the three fundamental principles) being a foundation in Aqeedah, Sheikh Muhammad ibn Abdil Wahab used to teach the students and general [masses]. *Sheikh Ibn Bāz said: “And verily Sheikh Muhammad ibn Abdil-Wahab used to teach the students and the general (masses) these principles, so that they may study it and memorise it, and (it) become firm in their hearts, due to it being a foundation in Aqīdah”*

And Verily preceeded the three fundamental principles three great beneficial letters by Sheikh Muhammad ibn Abdil-Wahab رحمه الله, and they are principles in the religion:

The third: Regarding Tawheed and its opposite (I.e Shirk)

And with this the three fundamental principles have come with the three letters as a completing covenant in the fundamentals of the religion, and an enlightening pearl for the monotheistic worshippers. *Sheikh Abdul Aziz ibn Bāz said about it ‘This is an important letter in Aqeedah’* (شرح ثلاثة الأصول للشيخ ابن باز ص٢١)

And due to its importance and numerous benefits and the need of a Muslim for it, the scholars (of the past) would encourage the leaders to make it mandatory upon the people with its study and understanding. *Sheikh Abdur-Rahman ibn Hasan رحمه الله said : “ The Amīr should instruct all the teachers and imāms of the masājid by attending at someone who will teach them their religion, and make mandatory upon them with reading what our Sheikh (Muhammad ibn Abdil-Wahab) رحمه الله has gathered in Kitab Tawheed, from proofs pertaining to the Quran and Sunnah, that which differentiates between truth and falsehood, for verily he has gathered alot of goodness whilst being summarised, and contains from the proofs of tawheed what is enough for whom Allah has given success, and clarified in it proofs in clarifying shirk which is what Allah will not forgive, and make mandatory upon them to question the general (masses) about the three foundations of the religion with its proofs, and four regulations”* (الدرر السنية ٣٣٨/٤)

And *Sheikh Muhammad ibn Ibrāhīm رحمه الله wrote to Imāms of masājid commanding them to teach the congregation of the masjid the three fundamentals, and to give them a daily gathering asking them about it. He رحمه الله said: “It is also obligatory upon you – Oh imāms – to teach the congregation the affair of the religion and ask them about it, as it is in “the summary of usool thalatha” and he chooses upon every Imām of a masjid to convey his congregation with that, and give them a daily gathering asking them in it about the affairs of their religion, and teach them what is hidden from them”*

Therefore due to the importance of this letter and general benefit I have written an explanation and called it “Taysìrul Wusūl Sharh Thalathatul Usūl” clarifying the main meanings, and to make visual its structure, proving them with sayings of the predecessors of this ummah and its scholars such as Sheikh ul-Islām Ibn Taymiyyah and his student Ibn ul Qayyim, May Allah have mercy upon both of them.

I ask Allah عز وجل to make it beneficial, and to make it an asset for us in the Hereafter, and May Allah send salutations upon our prophet Muhammad صلى الله عليه وسلم and upon all of his family and companions.

Translation: Muhammad Huzaifah, Student at the Islamic University of Madīnah and a student of the Imam and Khateeb, Sheikh Abdul-Muhsin al-Qāsim حفظه الله ورعاه